At the Deanston & Bain’s Roadshow at the beginning of March, the South African Distell Group together with its German distribution partner Diversa Spezialitäten GmbH presented two of its brands in Germany for the first time. On this entertaining evening, guests had the opportunity of enjoying the currently obtainable original bottlings, exclusively presented by International Brand Ambassador Billy Sinclair and the Master Distiller of the James Sedgwick Distillery, Andy Watts.

I had only been acquainted with the Distell Group in the past through the Bunnahabhain, Tobermory and Ledaig brands. The Deanston assortment on the other hand – with the exception of one or two new issues from independent bottlers – was almost entirely unfamiliar. I had read about Bain’s, admittedly, but had never yet come into contact with it. So this tasting offered the perfect opportunity for extending my horizon a bit. This is a journey, of course, where you can never say you have finally arrived (not that you would really want to).

At the start of the tasting there were four whiskies on the table. If anyone was worried that this might be all that was on offer, our host Dirk Schlüter, of Schlüters Geniessertreff [Schlüter’s Connoisseurs’ Corner], hastened to set their minds at rest. The four whiskies immediately on view were from the James Sedgwick Distillery. There would hardly have been space on the table to present all the whiskies of the Deanston brand (a good six in number today) at the same time with the elegance required.

So it was Master Distiller Andy Watts who first took the floor, to give an entertaining account of the production of Bain’s Single Grain Whisky in South Africa. After that, brand ambassador Billy Sinclair offered a virtual tour of the distillery, giving the audience a better impression of the original bottlings from the Deanston company. A performance in two acts…

Behind the Bain’s brand is the James Sedgwick Distillery. As a matter of fact, this is the one and only commercial distillery on the entire African continent. It is situated in Wellington, some 45 minutes by car from Cape Town, on the banks of the Berg River. James Sedgwick was a captain in the service of the British East India Company. Following the trading routes from Europe to India, he put in to Cape Town on a regular basis. He settled here some time around 1850, and opened a tavern called ‘The Captain’s Room’. A few years later he founded the J. Sedgwick Company, trading in tobacco, wine and spirits. He died in 1872. His descendants purchased today’s distillery in 1886. Back then it was still known as ‘Catryntjes Drift’.

Andy Watts is just the sixth Master Distiller in the history of this distillery, and Bain’s – which he introduced to the market in 2009 as South Africa’s first single grain whisky – is his brainchild. Till then, the whisky business had been dominated by Jack Daniels from the USA and Jameson from Ireland. For Andy’s taste, the character of the classic Jameson inclines to ‘smooth and easy drinking’, but it is rather flat in aroma and flavour. The American bourbon from Tennessee, on the other hand, has an appealing sweetness; but at the same time it is extremely oily, which puts many people off. So Andy Watts wanted to create a whisky which would be sweet to begin with, would tick the ‘smooth’ and ‘easy drinking’ boxes and would also be attractively fruity. This led to the discovery of Bain’s Single Grain, a whisky made one hundred percent from South African yellow maize. In naming it ‘Bain’s’, Andy paid tribute to the achievement of Andrew Geddes Bain – a Scotsman who supervised the building of the pass road between Wellington und Ceres, a 30-kilometre link still important today. 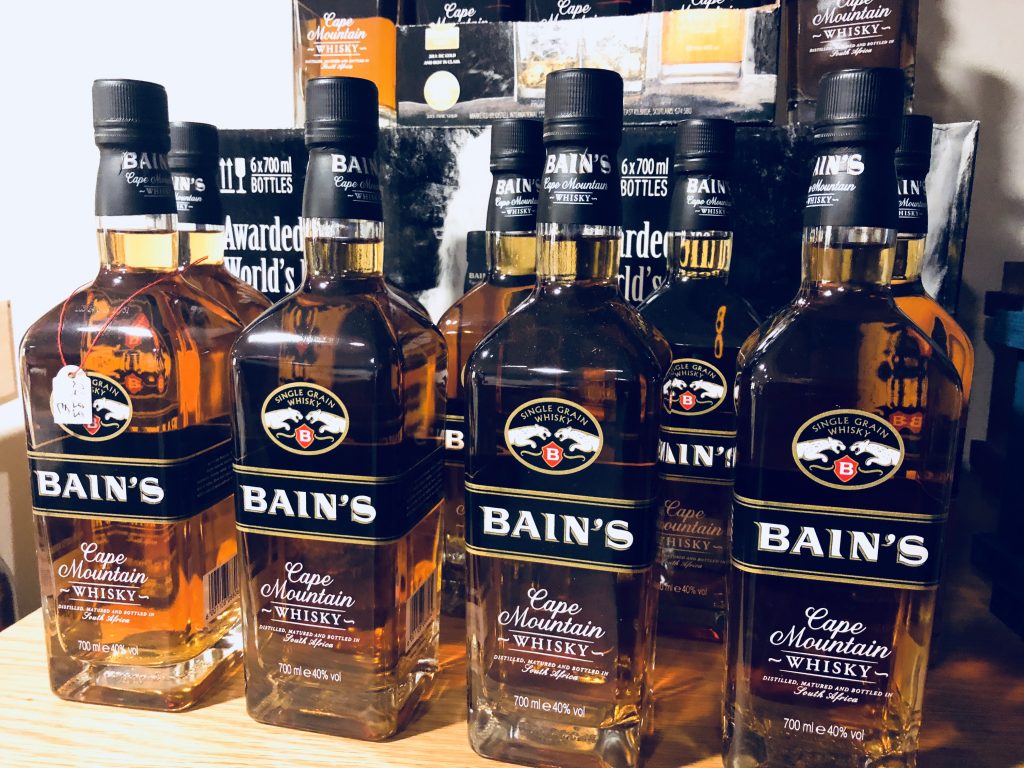 So what gives Bain’s its special quality? To answer that question, Andy Watts planned to break down the whisky’s components and offer a ‘deconstruction testing’, so as to introduce the whisky in evolutionary stages through four bottlings. We learned that this single grain first of all ages for three years, in first fill bourbon barrels. After that it is transferred to fresh casks of the same kind, and given another two years to mature. The climatic conditions in South Africa, and the high angels’ share, are responsible for accelerating the ageing process.

The tasting starts with a ‘new make’. This is distilled in a continuous process involving column stills (also known as Coffey stills or Robert Stein stills) to reach 94.3% percentage by volume. Today the new make is diluted to a pleasanter 40% for easy drinking, otherwise it would not be all that enjoyable. It comes over as very pure and clear in the nose, with a definite grain aroma and delicate hint of citrus, but rather neutral in taste.

It’s quite different with the next bottling, where Andy Watts presents a single grain which has been allowed to age for three years in older refill bourbon barrels. Vanilla notes, grain and a light fruitiness now set the tone. The change from the new make is perceptible, and yet the aromas are not quite so marked. It gets more exciting with the next glass, which now holds a three year old grain whisky from a first fill bourbon cask. More intensive honey and vanilla notes, together with pineapple, passion fruit and coconut, emphasise the multiple aromas this cask ageing has contributed to the whisky. 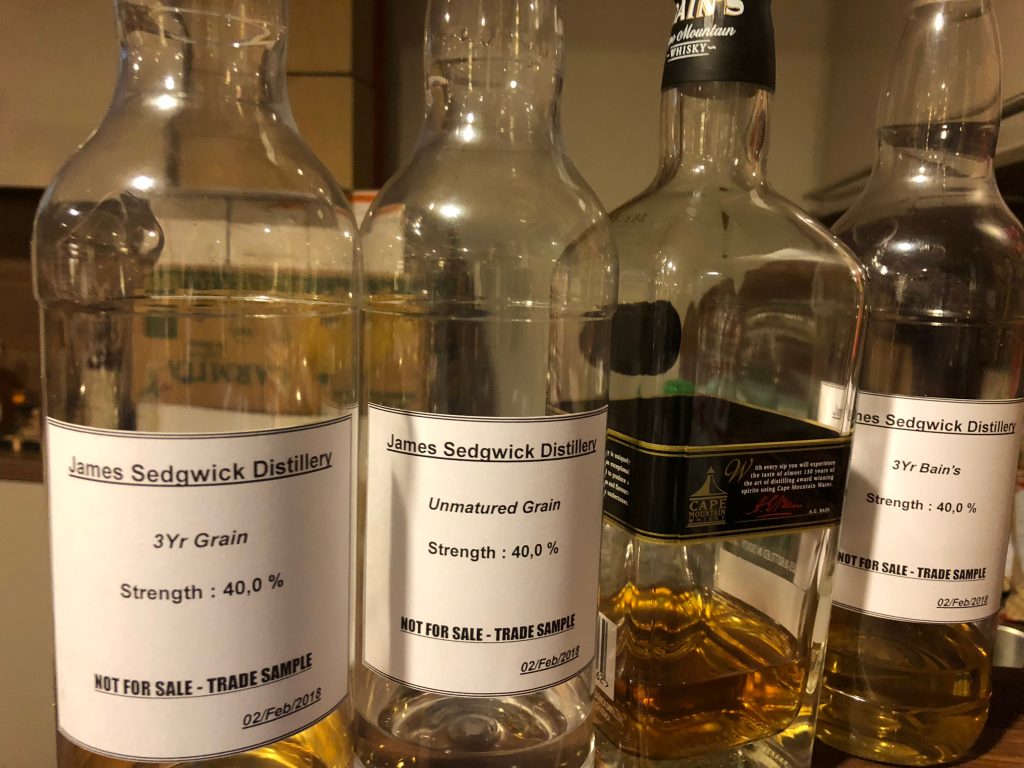 In conclusion, then, to the final product – the Bain’s Single Grain Whisky. It’s a sweet and fruity aroma directly in the nose, like a bowl of freshly cut tropical fruits, involving passion fruit, papaya, mango, roast banana, banana leaves, pineapple and grated coconut. Vanilla, honey and white chocolate flavours mingle with a powerful grain aroma, light and pleasing. On the palate it makes the same impression, with banana, coconut, passion fruit and vanilla – a slightly peppery suggestion in the background, together with a hint of oak. Sweet, clean, balanced – ‘easy drinking’ in short, just the product Andy Watts wanted to create.

It’s not the kind of whisky that you would spend a whole evening discussing and getting to grips with, but it is just what I can see myself drinking on holiday, looking out over the sea, or enjoying on the terrace of a warm summer evening. Uncomplicated without banality – sweet, fruity, flavoursome and quite simply delicious.

After a quick rearrangement of the props, we continue with a presentation of original bottlings from the Deanston distillery. The participants have something to look forward to here – as well as the Virgin Oak and the Twelve Year and Fifteen Year Old Organic, there’s the Eighteen Year and the Twenty Year Old from oloroso sherry butts, and the Decennary bottling which is only obtainable locally.

Billy Sinclair introduces the tasting with a virtual tour of the distillery. So we learn to begin with that it was set up in a former cotton mill in 1966, situated right next to the Teith river near Stirling in Scotland. The company has always believed in the quality of manual crafts. According to Billy Sinclair, there are only two computers in the place – one in the manager’s office and the other at the visitors’ centre. Otherwise all the equipment still goes back to the year 1966, including the ‘open top’ mash tuns – which have always had to manage without a lid, in view of the low ceilings of the building. The architecture just wasn’t designed with a distillery in mind.

For getting to know the character of the Deanston product, the Virgin Oak (Non-age statement) is a good starting point for the evening’s tasting. Bottled at the typical Deanston 46.3% vol., without artificial colouring or chill-filtration, so more or less based on the distillery’s motto of

‘Nothing added and nothing taken away’,

it impresses above all with its vanilla and honey notes, in combination with fruity bouquet of ripe peach, pear and bright citrus tones, added to a notably malty grain aroma. The taste is likewise dominated by vanilla, honey, malt and citrus tones, with a slightly peppery touch.

By contrast the Twelve Year Old Deanston makes a more rounded and accommodating impression, though the character is very similar. Bright citrus fruits, caramel and vanilla are felt on the nose, a little bit sweeter than in the case of the Virgin Oak, and with something of milk chocolate, apple and the grain flavour I particularly associate with Deanston.

The distillery, incidentally, uses two wash stills and two spirit stills, with a capacity of 24,500 and 16,802 litres respectively. The new make goes into the barrels at 63.5% vol. These are mainly first and second fill bourbon casks, and locally produced malt is often used, as in the case of the Fifteen Year Old Organic (always produced in a limited edition), which is the next stop on our tasting tour. It’s elegant, pure and highly floral, presenting with a sweet flavour of warm caramel and toffee in milk chocolate, together with candied orange and lemon peel as well as the grain.

After this we go on directly to the 18 Year Old Deanston, which has first of all been aged for 16 years in second fill American oak casks, before being transferred to first fill American oak casks for a further two years. This is a whisky that it certainly takes time to appreciate. I think I can detect wet grass, hay, straw and something of an earthy note. It’s also very floral, with a tang of heather, grain, malt and vanilla. Pear and lemon are also present again here, though unobtrusively.

The Deanston 20 Year Old is in a class by itself, in comparison with the bottlings we have sampled so far. This has been aged exclusively in oloroso sherry casks. A successful contrast with the liquors we have already tried – this spirit has been aged in sherry casks in an extremely elegant way. The typical sherry notes are immediately present: raisins, figs, dates, dark dried fruits, lovage, cinnamon and oak. A very creamy feel in the mouth – mouth-watering, as the Scots like to say, with additional suggestions of vanilla, butterscotch, nutmeg and white chocolate. 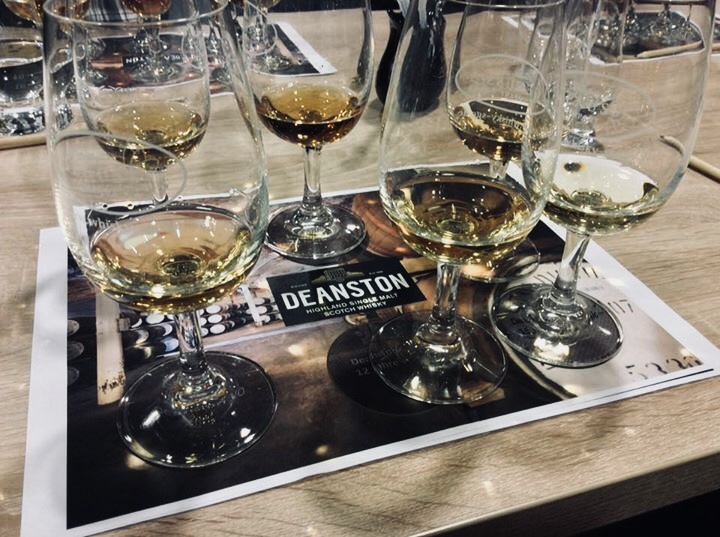 The final pièce de résistance is the Deanston ‘Decennary’. On the occasion of the 50th anniversary of the distillery, whiskies from four different kinds of barrel dating from different decades were blended together – from 1977 refill oak barrels and 1982 American oak casks, along with whiskies from 1996 port pipes and sherry casks from 1997 which had previously been filled with Pedro Ximenez sherry.

This is initially dominated by a powerful aroma of oak, along with polished wood, sherry, lovage, dark fruity flavours and sweet caramel – a real ‚old school‘ whisky. Walnut, date, fig, cinnamon and dark chocolate blend in with aromas of nutmeg, candied orange and coffee beans.

It presents a full flavour in the mouth, almost buttery but with a slight tingle, backed up by dry fruits, oak, malt, caramel, sherry, orange and coffee. The aftertaste is progressively drier, with sherry, oak and a slightly bitter note of dark chocolate and espresso. You feel you need some time to appreciate this.

And so once again an altogether enjoyable evening at Schlüter’s comes to an end. With their lively presentation, Andy Watts and Billy Sinclair have introduced the audience to two distilleries and familiarised them with the character of each. The Bain’s Single Grain was the product that I found much the most surprising. In the past I had only come across older single grain whiskies, mostly from sherry or port casks.

Faced with a young single grain from a bourbon barrel, I was a bit sceptical. But the spirit completely won me over. It’s pleasing, smooth, sweet and fruity – easy drinking at its best.

No less interesting was the tour of the Deanston original bottlings, and here it was the Decennary above all that won my vote. Of course it was only to be expected that I would go for the bottling that is exclusively obtainable in Scotland…

Many thanks to Billy Sinclair, Andy Watts, brand ambassadress Chantalle Seidler and our host Dirk Schlüter for a very entertaining evening!